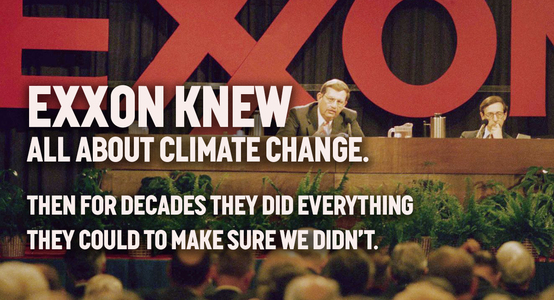 Recent reports have shown that Exxon may have known about the threat of climate change decades ago. Yet over the course of nearly forty years, the company has contributed millions of dollars to think-tanks and politicians that have done their best to spread doubt and misinformation -- first on the existence of climate change, then the extent of the problem, and now its cause. If Exxon intentionally misled the public about climate change and fossil fuels, then they should be held accountable. Attorneys General in New York, California, Massachusetts, and the U.S. Virgin Islands have already announced investigations - now we want Maryland to join them and launch an immediate investigation as well.

Big news broke last year: Exxon knew about climate change in the 1970s. They *researched* it. And surprise, surprise, they’ve been lying about it ever since.

Not only did Exxon not come clean about what they found -- they've spent tens of millions of dollars over the past forty years trying to convince us all that climate change isn’t real. When that didn’t work, they said climate change isn’t that bad, and when that failed, they said, “Oh hey, it’s not our fault.”

We’re talking about what could be the largest case of fraud in human history.

It’s no secret that the fossil fuel industry is a blight on the planet. But right now, we have a chance to do real damage to Exxon, and push their shady, oil company lies out into broad daylight. If we can shine a light on this case of blatant fraud, we'll be one step closer to dismantling the power of an industry that's still recklessly -- and knowingly -- driving the climate crisis.

Attorneys General in New York, California, Massachusetts, and the U.S. Virgin Islands have already announced investigations, and AGs across the country are thinking about following suit. But they need to know that we’re watching, and that we demand they act now.

These sorts of investigations are what convinced America about the evil of Big Tobacco -- it’s time for Big Oil to get the same treatment.

So please, join the call: Exxon’s day in court has come -- they need to tell the truth in court, and face the consequences of their lies and fraud.

By signing this petition you will receive updates from 350.org and Chesapeake Climate Action Network. You can unsubscribe at any time.

We plan to deliver the petitions in person to AG Frosh along with similar petitions from other climate and environmental organizations here in MD.