Say no to corporate power grabs - reject the Trans-Pacific Partnership 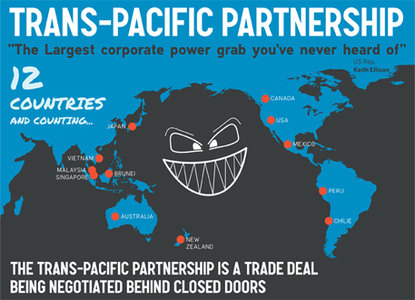 The Trans-Pacific Partnership (TPP) will massively boost corporate power at the expense of our climate and environment, human and workers’ rights, sovereignty and democracy. We strongly urge you to publish the text of the TPP as it stands now, reject proposals that would undermine your regulatory power and oppose this corporate power-grab

The Trans-Pacific Partnership (TPP) is a highly secretive and expansive free trade agreement between the United States and twelve Pacific Rim countries, including Canada, Mexico, New Zealand and Australia. Leaked text reveals that the TPP would empower corporations to directly sue governments in private and non-transparent trade tribunals over laws and policies that corporations allege reduce their profits.

Legislation designed to address climate change, curb fossil fuel expansion and reduce air pollution could all be subject to attack by corporations as a result of TPP. Additionally, the deal could criminalize internet use, undermine workers’ and human rights, manipulate copyright laws, restrict government regulation of food labeling and adversely impact subsidized healthcare.

The movement we are building locally, nationally and globally to move beyond fossil fuels and create a safe climate future is growing by the day and the fossil fuel industry is getting scared of the uncertainty ahead. The TPP is a symptom of this fear – a massive bid to overthrow any restrictions we might throw at them. But we can stop this. The might of our movement is greater than their money or manipulation.

Sign this petition to show our governments that we won’t stand for foreign corporations disabling our sovereignty, democratic processes or the right to a safe future.

WikiLeaks just released the secret draft text for the entire TPP Environment Chapter -- and it is shocking:

"The Environment Chapter covers what the Parties propose to be their positions on: environmental issues, including climate change, biodiversity and fishing stocks; and trade and investment in 'environmental' goods and services.

When compared against other TPP chapters, the Environment Chapter is noteworthy for its absence of mandated clauses or meaningful enforcement measures. The dispute settlement mechanisms it creates are cooperative instead of binding; there are no required penalties and no proposed criminal sanctions. With the exception of fisheries, trade in 'environmental' goods and the disputed inclusion of other multilateral agreements, the Chapter appears to function as a public relations exercise."

TPP is finally being exposed! Here's a some recent press coverage:

Trans-Pacific Partnership: a guide to the most contentious issues
http://www.theguardian.com/world/2013/dec/10/trans-pacific-partnership-a-guide-to-the-most-contentious-issues

Deal or No Deal on the Trans-Pacific Partnership Agreement: Congress Weighs in
http://www.huffingtonpost.com/ilana-solomon/deal-or-no-deal-on-the-tr_b_4405256.html

There's still a lot to do -- we need to pressure the negotiating parties to pull out from this dirty agreement! Please ask your friends to take action and sign this petition too.

A few resources on the Trans Pacific Partnership:

The Trans-Pacific Partnership treaty is the complete opposite of 'free trade'
http://www.theguardian.com/commentisfree/2013/nov/19/trans-pacific-partnership-corporate-usurp-congress