Support the Heathrow 13 and stop the new runway! 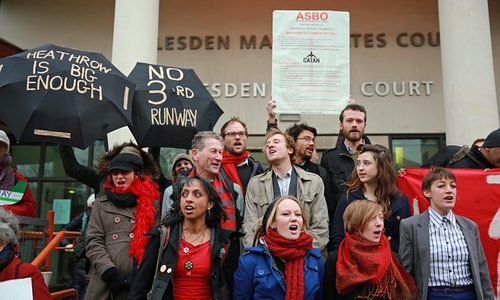 In 2009, you made us a promise: No ifs, no buts, no third runway. But then you commissioned Howard Davies to investigate where a new runway should be, and he has recommended Heathrow.

At Paris climate talks and amid increased flooding, you promised to tackle climate change. But a third runway at Heathrow, or indeed anywhere, would be devastating for local people, for people affected by climate change in the UK and around the world, and for the planet. Don’t go back on your promise.

We call for the Government to deliver its climate promises by rejecting plans for new runways, at Heathrow or elsewhere.

13 climate protesters are facing prison to silence protest against new runways which would wreck Government policy to protect us from catastrophic climate change.

The Paris agreement underlines the need to cut emissions now. Aviation is the fastest growing source of carbon emissions and the only way to reduce emissions from aviation to a safe level is to reduce the number of flights.

Despite David Cameron’s ‘no ifs, no buts’ election and manifesto promise to not build a new runway following massive public outrage at the proposals, the Government is now breaking its promise.

There is more than enough aviation capacity for people’s annual holidays and the declining number of business flights. Airport growth is driven by a minority of frequent fliers who take the majority of UK flights to second homes and tax havens.

Meanwhile, emissions from aviation are destroying people’s lives. People in the Heathrow area, who already have to breathe illegal levels of air pollution and suffer intolerable noise, would now see their homes destroyed. People across the UK have been flooded at Christmas, and every year hundreds of thousands more people die due to climate change - mostly in poor countries in the Global South, the people least responsible for emissions.

The Government is expected to make its decision on whether to expand Heathrow or Gatwick – or neither, if we are successful – this year. It’s one or the other: build new runways or protect us from climate chaos. The people in the Global South who are dying due to climate change already have no voice in the debate. We can show them that jailing peaceful protesters will not silence those of us who do.

To No. 10 Downing Street, ahead of the Heathrow decision in summer 2016.

We'll be joining together all of the names from partner campaigns with 38 degrees, Friends of the Earth and others.